MainOne has announced plans to expand its data centre business, MDXi, into new territories across West Africa with a target to build new facilities in 3 new locations including Sagamu, Nigeria; Accra, Ghana; Abidjan, Cote D’Ivoire in addition to an ongoing expansion of its Lekki Data Centre in Lagos, Nigeria. Over the next ten years, the company plans to build new Tier III data centres in each location and invest in infrastructure projects as part of a push to ramp up technology penetration in the region.

Affirming the company’s commitment to the digital transformation of West Africa, Chief Executive Officer of MainOne, Ms. Funke Opeke, highlighted the untapped investment opportunities in the region and noted that ICT infrastructure investments will support rapid technology proliferation. “Given the size of its markets and status as home of some of Africa’s biggest economies, West Africa has a vantage opportunity to adopt infrastructure development to scale up its industrialisation. Targeted investments in the region will bridge the gap for digital infrastructure and address the increasing reliance on data collection.”

MainOne’s data centre subsidiary, MDXi built the region’s largest Tier III facility in 2015 for $35m and recently commenced the second phase of the project, investing an additional $8m to construct 300 additional racks in its Lekki facility. Focused on developing a data centre ecosystem spanning facilities across West Africa, the company will launch its new Tier III data centre project in Sagamu, by Q4 2018, Ghana in 2019 and Cote I’voire in 2020. MDXi is West Africa’s largest full-scale data centre provider offering colocation, wholesale deployments, interconnection and cloud services and has been dubbed the region’s Telehouse, due to its status as most connected data centre, proven competence to interconnect OTTs and major network, content and financial providers as well as interconnections at multiple peering exchanges in Nigeria, Ghana, Amsterdam, and London. 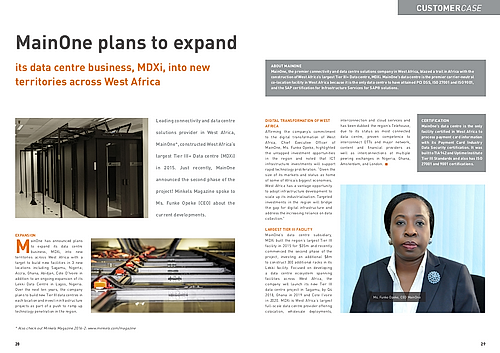