Home Other cases Plieger opts for IT continuity and optimum availability

Plieger opts for IT continuity and optimum availability

Plieger has its origins in the metal trade, dating back a hundred years. In those years, the company has grown into a national wholesaler of sanitary and climate products. Plieger now has 750 employees, 61 branches including three distribution centres – with a fourth in development. Minkels Magazine spoke with Plieger and All IT Rooms about the IT challenges that Plieger was facing.

FROM AMUSEMENT PARKS TO RESIDENTIAL TOWERS

With its own expedition, Plieger supplies a range of more than 150,000 articles – of which 60,000 in stock – to installers, plumbing companies, retailers and hardware stores, among others. “We work for very diverse customers. They differ from local freelancers to large national project organisations”, says John van Schaijk (Corporate IT Manager Plieger). “Our products can be found everywhere. In homes, hotels, but also in amusement parks and residential towers.”

Plieger wants to be close to her customers. “That is why we chose to roll out Express locations. If customers order a product and it is in stock, they receive it the same day. If a product is not in stock, it will be delivered at an Express location of their choice the next day. This way, we make life easier for our customers; they can even order via WhatsApp. And, of course, we have our webshop, because e-commerce is also becoming increasingly important to us.”

An environment that is becoming increasingly digital asks for a professional IT space. Maarten Post van der Molen (System Manager Plieger) explains: “At our head office in Zaltbommel (the Netherlands), we have a well-functioning IT space, filled with Minkels products. When we wanted to increase our availability, we decided to realise a second data centre nearby; in Den Bosch. We wanted to create a similar data centre as the one in Zaltbommel – an integrated solution with redundant climate and power facilities.” Plieger got in touch with All IT Rooms; specialist in designing, building and managing data centres and server rooms. “But All IT Rooms did more than just elaborate on the concept in Zaltbommel. They have mapped our wishes and analysed whether we were asking the right questions”, says Van Schaijk.

All IT Rooms had a number of recommendations for the new IT space, including in the area of cooling. Ronald Kok (director of All IT Rooms): “For Plieger, modularity and expandability were particularly important. The cooling system that Plieger ultimately opted for – row-based cooling (Varicondition) – meets these requirements; you easily add extra cooling and thus easily expand the cooling capacity. To expedite this process, we have already placed dummy units that are easily replaced by the Varicondition row cooling. In addition, with this system it is not necessary to cool the entire data centre; you use less air and are closer to the equipment because the racks and cooling units are housed in a cold corridor layout; that works much more efficiently. This allows you to cool with relatively high temperatures, which means that the energy consumption is drastically reduced. The air that goes into it is 21 degrees Celsius. With those temperatures outside everyone would wear shorts – so it’s not really ‘cooling’ anymore!”

READY TO BE USED

Meanwhile, the IT space is ready to be taken in use. Jamy de Jonge (Account Manager Minkels): “The room is fully equipped with the products of Legrand Data Center Solutions. From the racks of Minkels to the UPSes of Legrand.” Plieger is very pleased with the chosen products and the cooperation with All IT Rooms and Minkels. Van Schaijk: “From the beginning, we had the same goals in mind and we gave each other space and helped one another. We were really taken care of during the whole process; a total concept has been put in place by knowledgeable partners who cooperated in a pleasant way – with us and with each other. We could rely on them – from project management to the delivery protocol – while we focused on our own core business. And now we can rely on the continuity of our IT.” 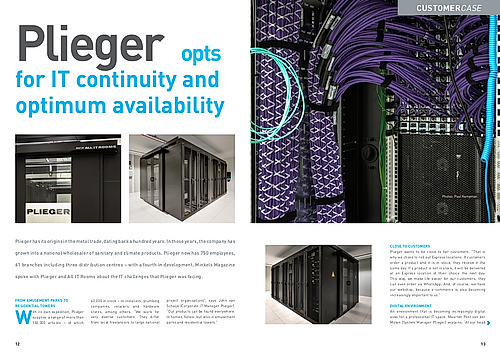