﻿As a university medical center, the AMC is tasked with three core responsibilities. First and foremost is to treat patients. The Academic Medical Center also conducts considerable medicalscientific research. The third core responsibility is to provide education and training. Fulfilling these responsibilities requires a lot of data traffic within the AMC and that poses the necessary challenges, according to Tim Hol (General Services ICT Network Management) of the AMC.

SER OF THE FUTURE

The existing Satellite Equipment Room of the Academic Medical Center was equipped with SER cabinets that would become hot too quickly. Hol: “The temperature in the cabinets began to increase due to an increase in Power over Ethernet devices and all the cables. Therefore, we got together with Minkels to conduct a site survey and an action plan was prepared to renovate the Satellite Equipment Room. Minkels based its solution on the MiniCube concept for this space that we call the ‘SER of the future’. This micro data centre, that has been custommade for us, ensures that we can support the network with more power while keeping the area cool. We have now moved from cabinets that were sixty centimetres wide to racks that are a metre wide. The micro data centre is also equipped with a Legrand UPS, Minkels in-row cooling, EXXFIRE fire suppression equipment and Raritan intelligent PDUs and sensors – resulting in an integrated total solution. As an introduction, the solution was assembled and presented to the managers on site. In particular the standardisation, the reduced downtime, (remote) monitoring of the environment – from temperature monitoring to fire suppression – and the enjoyable collaboration with Minkels really appealed to us. The project has now been awarded to Minkels.”

The ‘SER of the future’ isn’t the only data centre project taking place at the AMC. “At AMC we currently have poor telephone coverage. We are setting up a new computer room for our indoor telephony. Minkels worked with us and gave us ideas and input in the design. This room will be equipped with a Minkels corridor with Legrand cable management systems, twenty Minkels cabinets with Minkels 650 water coolers and intelligent Raritan PDUs. A stress test has also been conducted in the room. By increasing the temperature, we could see what the effect was on the equipment. Minkels did well on this stress test!”

Minkels was also given the opportunity to optimise an auxiliary data centre at the AMC. “It was time to upgrade the equipment in this back-up computer centre. The heat density had increased substantially over a twelve year period; an imbalance developed between power consumption and cooling capacity. We then extensively researched cooling systems. In 2017 we ended up moving from decentralised cooling to centralised cooling. We use PCMs (Phase Change Material) for this purpose, which consist of salt hydrate. In an emergency situation, enough cold water is drawn from a buffer tank over a period of X hours to cool the cooling unit. Our cooling system is now much more efficient than before. We have also moved from standard PDUs to the Raritan intelligent PDUs. Therefore, we are more in control in this area as well.” 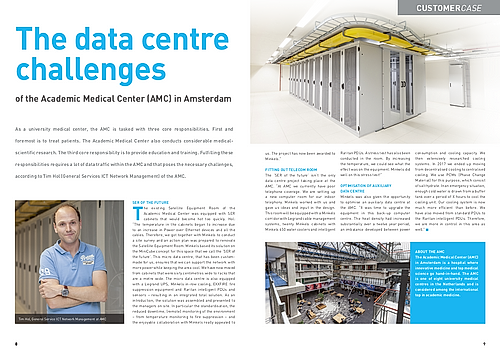