Thermal behaviour of a modular UPS in the Cold Corridor

The Minkels White paper 06, Thermal behaviour of a modular UPS in the Cold Corridor, is one in a series of White papers sharing valuable data centre knowledge on managerial and technical levels.

Minkels has recently launched a new modular UPS system, called Archimod, which is available in the range of 20-120 kVA. The Archimod UPS technology has existed for 10 years now and because of continuous improvement meets the industry latest efficiency rates. What's new is the fact that the UPS system is now housed in an air optimised rack to make sure battery conditions are positively influenced by the cold aisle temperature conditions. Besides mechanical integration, the air optimised rack perfectly fits with the Minkels Varicon-M range. The interior of the UPS can be shifted in the frame to be adopted in closed loop cooling solutions. The range and form factor of the modular UPS makes it an ideal building block for a modular and scalable data center design. UPS capacity can be expanded just when it is needed maximizing a high efficiency throughout its load range and supporting the principle of 'pay as you grow'. UPS's are widely used in the data center industry but are typically located in a technical room where an environmental temperature of around 25° exists. The IT-room however has a hot and cold aisle configuration with temperatures in the cold aisle typically ranging between 20-25°C and in the hot aisle reaching 35-42°C. The hot aisle temperatures are for a UPS, in particular the batteries, a harsh environment. Batteries show reduced performance when confronted with temperatures higher than 25°C. Therefore a critical review is conducted towards the thermal performance of the modular UPS system in its air optimised housing in a typical hot and cold aisle environment.

The thermal analyses of the UPS system is narrowed down to finding the optimal pressure difference between the cold and hot aisle such that the cold air surrounds the batteries instead of the hot air. Additionally the temperature effects during discharge and recharge are evaluated since that is a critical moment where the UPS must perform as expected. The tests have shown that the special air optimised rack, for the Minkels Archimod UPS, is able to deliver the cold aisle temperature to the batteries and isolate them from the hot aisle temperature. At a minimum pressure differential of 5 Pa, between the cold and hot aisle, the battery temperatures do not exceed the cold aisle temperature in stand-by operation. Examples are given showing how, in different cooling configurations, this situation can be achieved as well. Also during discharge and recharge the temperatures in and around the battery tray stay within the specifications of the manufacturer. It can be concluded that when using the new Minkels modular UPS in an IT-room, the reliability and performance is guaranteed. 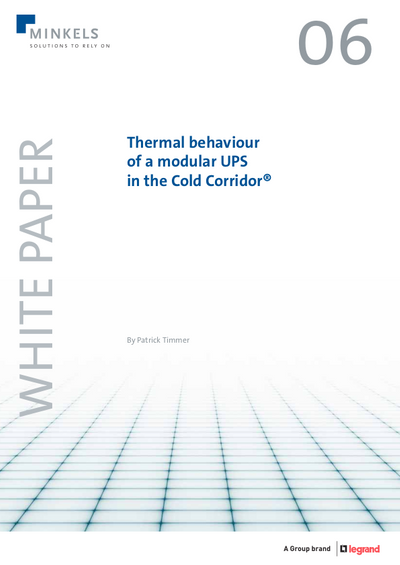